A comic created by a graduate from the University of Dundee Master’s in Comics and Graphic Novels has been published in an anthology by a major publishing house. Letty Wilson’s comic Smudged featured in this year’s Dark Horse anthology The Secret Loves of Geeks, a sequel to their popular anthology The Secret Loves of Geek Girls (2016). Letty still works closely with the University as a comics artist on several comics projects. We could not be more proud of Letty’s accomplishment. Below is an interview with the artist offering insight into her experience publishing with Dark Horse. 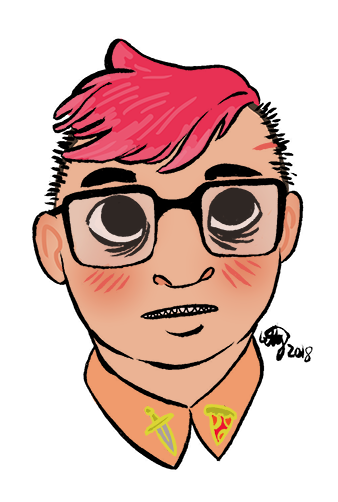 SCCS: When did you attend the University of Dundee? What courses did you take?

Letty Wilson: I was at the University of Dundee from September 2013-14, doing the MLitt in Comics studies.

SCCS: How do you think this impacted your art/ view of comics?
LW: Hugely. I’d read plenty of comics before but never with any particular direction or focus – none of my friends were into comics much so it was mostly whatever I happened to come across. Studying comics formally was a huge change and opened me up to a really wide variety of different styles and approaches – particularly comic traditions from around the world. It was also the first time I was with a bunch of other people making comics so I think my art leapt forward just through making so much more work in that very creative setting.
SCCS: Did you work in the DCCS at all? If so when?
LW: I was sadly a bit early to work in the DCCS – it started up just after I left and moved to Glasgow – but I’ve been lucky enough to visit for events and it’s a fantastic space and a great resource for students and graduates.
SCCS: Did you work for the SCCS? If so when?
LW: I’ve done some work with the SCCS – I helped set up the first website they had whilst I was studying at Dundee, and have done various bits of illustration work associated with them since.
SCCS: Can you give me an overview of how you came to get published in a Dark Horse Anthology?
LW: The editor of the anthology, Hope Nicholson, put out a call particularly looking for ace-spectrum (asexual/aromantic/agender) comics creators to submit work for an upcoming project. Ryan King, a writer I’d worked with previously, saw it and forwarded it on to me and I put my name forward. Hope said she liked my work and from there asked me to put together a pitch/ rough outline of an autobio or non-fiction story that I’d be willing to submit for Secret Loves of Geeks! Sounds fairly routine but there was a lot of excited yelling on my end when she said she liked my pitch and wanted my story in the book.
SCCS: What were your inspirations for “Smudged”?
LW: I wanted to talk about how my experiences of being asexual and aromantic intersected with those of having anxiety – I think both experiences can come with a lot of isolation and not necessarily the healthiest coping mechanisms – for instance I used to draw compulsively on my hands. I started out playing with that imagery, and seeing how I could also tie it into the geek-culture theme of the whole book. I combined that with using a cute, colourful art style that had all the people as anthropomorphic animals – partly because animals are easy and fun to draw, partly because it gives a bit of distance that I find makes it easier to tell personal stories.

SCCS: How has the reception of your work been?
LW: It’s been so amazing! I’ve had some really lovely messages about the piece – one email in particular had me in tears talking about how much they identified with the story. Mainly it’s just been really exciting to see a book I worked on in shops around the world, and see it affect people all over. Also one of the reviews said my drawings were cute and that was Very Good.
SCCS: Have you gotten offers or attention from other comics writers/publishers/etc.?
LW: It’s often hard to tell quite how people have found your name to ask you about new projects etc, but I do think I’ve had more people enquiring about things like comics and illustration gigs since – it’s early days though, and I’m very aware that I’m one of the least known rookies in that book, which has some big stars on the cover. But being able to mention it in pitches and expressions of interest does seem to have an effect – people recognise the publisher and I think it makes them pay attention a bit more than a string of self-published works. That probably shouldn’t be how it works but it’s understandable.
SCCS: What other titles/work are you working on at the moment?
LW: At the moment I’m working on: an ongoing webcomic called Owl People, which is about a detective trying to solve fairy crimes; issue #5 of Cosmic, a sci-fi coming-of-age story written by Erin Keepers, which should come out this summer and close out the first arc of the series; a short comic about Diane Abbott, written by Siana Bangura for 404Ink and BHP’s We Shall Fight Until We Win, an anthology of comics about amazing women in British politics to celebrate the centenary of suffrage for (some) women in the UK; and a short horror comic written by Cale Ward and based on Maori folk tales for an anthology by Hellcat Press called Screams Heard Around the World. I think that’s it, though other bits and pieces are always cropping up!

SCCS: Where can we see your work?
LW: You can see my work at behance.net/lettydraws and read Owl People at owl-people.com. And we will be at Thought Bubble in Leeds with copies of Cosmic #5 and We Shall Fight Until We Win.